Sidney Chambers and the Forgiveness of Sins by James Runcie 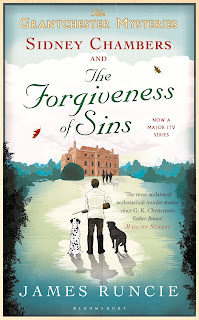 The fourth in Runcie's series of Grantchester Mysteries brings us to Cambridge in 1964 with six new puzzles for sleuthing priest, Canon Sidney Chambers. And you couldn't complain that these mysteries aren't inventive. The first features a musician seeking sanctuary in Sidney's church, fearing that his wife has been murdered in the night by his own hand. Josef Madara is a violinist with the Holst Quartet, his wife the cellist. There is something of a lover's triangle here, so plenty of motives, but the  body seems to have vanished.
On another musical theme, a tragedy occurs in the story, 'Fugue', when a piano being hoisted through the window of musician Orlando Richard's rooms becomes loose from its moorings before crashing to the ground via Orlando's head. Was this an accident or something more sinister?
A chemistry lab explodes at Millingham School on prize day, when Sidney just happens to be there to umpire the cricket match. Did someone have it in for the chemistry teacher or was this a hoax gone wrong?
More sensitive issues, such as domestic violence and the kind of obsession that urges a person to write poison pen letters, appear in further stories. Both of these feature posh Amanda, Sidney's gal pal who could never quite bring herself to marry a clergyman, and now wonders if she has made a terrible mistake, having to settle for nice but 'weak' Henry.
The collection is rounded off with the story: 'Florence', when Amanda invites the Chambers family to visit the Italian city when her work takes her to the Uffizi Gallery. Of course there is a theft of some valuable art, and Sidney becomes a prime suspect.
Overall, I found this collection a little slow to get off the ground, but the pace picks up with the last three stories. Sidney gets a promotion and moves his family to Ely, not so far away from Cambridge that he would miss his weekly socialising with Inspector Keating, and his reputation for investigative prowess follows him to his new post.
There is still plenty of priestly philosophising - there is always another sermon to prepare - and this with Sidney frequently being in the dog box with wife Hildegarde threatens to slow the pace at times. However there is plenty to enjoy with the charm of the settings, the music and art references and the background of 1960s England, still kind of tweedy, but with the Beatles and others livening things up a bit. It all seems perfect for television, and it is no surprise that the Grantchester Mysteries is now gracing TV screens in Britain.
Posted by Caught Up in a Book at 14:27