The House at Sea's End by Elly Griffiths 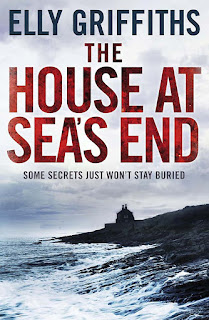 This is the third novel featuring Elly Griffith's forensic anthropologist, Ruth Galloway, which recalls events that took place on the north coast of Norfolk during the Second World War. Ruth's archaeology pals, Ted and Trace are part of a team who discover six bodies buried at the foot of a cliff and it is soon Ruth's job to date the bodies. She discovers the deaths go back to the 1940s, that the bodies are German and each has died from a single bullet wound to the head, rather like an execution.
The tides have been eroding this coast for years, mercilessly threatening the house that sits on top of the cliff, Sea's End House. Without the sea, the dark secrets from this corner of the war might never have been uncovered. Somehow Ruth is on the spot when Inspector Harry Nelson interviews the house's owner, former MP, Jack Hastings. His elderly mother, Irene, now in her nineties, talks about her husband, Captain Buster Hastings, who led the local Home Guard at a time when a German invasion was feared at any moment.
Irene mentions the names of some of the younger Home Guard members who might be still alive and able to shed some light on what happened, and Nelson is soon amassing clues that are startlingly cryptic. When more deaths occur, it would seem that someone is out there who still wants to suppress the truth of what happened.
Meanwhile Ruth is coming to terms with being a working mother. Just back from maternity leave, she has a daughter Kate to think of as she darts off to examine more sites of interest and help Harry piece together the clues only someone with a mind like hers could figure out, or someone who likes Countdown on the telly. She has unfinished business with Nelson, which adds to the emotional drama of the story, making it a bit more than your standard whodunit.
And we have our favourite characters popping up again: Ruth's oddball Druid friend, Cathbad, Nelson's subordinates, Judy Johnson, a reluctant bride in this story, and the insensitive Sergeant Clough now oddly romantically entangled with Ruth's archeologist friend, Trace with the purple hair.
Then there's the weather. The action really gears up a notch during an unseasonable snowstorm and there's a frantic scene by the sea involving explosions as the perpetrator closes in on Ruth - she really needs to lose a bit of weight and get fitter, as these battles for survival seem to be a regular feature of the books. It all adds up to an entertaining page-turner, with enough to keep the brain occupied and plenty of surprises. I'll be keen to check on Ruth again soon, as she's such good company.