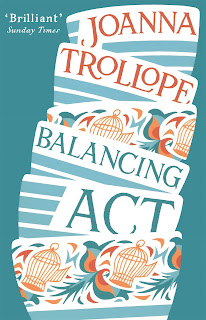 You can't help feeling a little bit sorry for Susie Moran, the matriarch a the centre of this family drama. She's the successful head of her own pottery company with three talented daughters all involved in the family business. But now in her fifties she's eager to keep her finger in the pie and give her sense of creativity a bit of a boost. When a cottage comes up for sale that has connections to her old family pottery in Staffordshire, she snaps it up without involving her daughters, causing ructions that last well through the book.
Personally, I didn't have a problem with Susie's decision and thought a bit of diplomacy all round would have sorted out her daughters, though I did worry a bit about poor old Dad. Jasper Moran has married a force to be reckoned with in Susie; she has turned a fairly moribund spongeware pottery into a thriving success story. Jasper elected to stay home to raise his daughters in their London house, his sound-proof basement studio a place to meet his fellow bandmates for the odd session, but really his musician career has been on hold for thirty years.
The girls are just as talented as their mother, and beginning to want more of the business pie. Cara and her husband Dan run the commercial side of things, and have ideas about how to grow the business they are dying to try out. Ashleigh does the marketing, but is exhausted by her young family. When hubby, Leo, suggests he stays at home for a year, she can focus more on her work and decides she should have a more results-based salary.
That leaves Grace, the artistic one who works at the pottery in Staffordshire. She's a bit beleaguered by a relationship that is going nowhere and tends to be pushed around by her bossy family. When their long-lost grandfather turns up out of the blue, his name being mud for having deserted Susie when she was a baby, it is Grace who feels expected to put him up at her flat.
With a combination of restlessness, resentment, bitterness and dissatisfaction circling among the various characters, the scene is set for plenty of drama and a bit of a shake-up. The reader knows that no one will want to return to how things were at the beginning of the story and along the way there will be Trollope's amazing way with dialogue, and characters brought to life who earn the reader's sympathy. Even grandfather Morris is appealing with his stories of living hand-to-mouth on the beach in Africa, and his reasons for leaving are weirdly complex.
Morris and Grace's boyfriend Jeff both deserve plenty of recrimination, but other males come to the rescue: Ash's lovely husband Leo and Grace's coworker Neil, for starters. The three daughters are almost from a fairytale, a modern, realistic fairytale; like fairytale traditions, the youngest is the most interesting, possibly for being more richly drawn. It's all classic Trollope - I didn't start the book with any great expectations, and while it didn't make the earth move, it was very satisfying none-the-less and surprisingly hard to put down.