The Detective's Daughter by Lesley Thomson 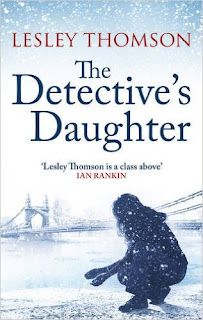 This is the first in a promising series by Lesley Thomson featuring Stella Darnell, a solitary forty-something who runs a cleaning company called Clean Slate. Her father, Terry Darnell, a career policeman, had always wanted her to join the force, but a messy divorce and Stella's resentment that he'd always put his job before his daughter meant that she preferred to do her own thing. She likes things tidy, obsessively so, and being her own boss; Clean Slate is perfect, until Stella's father dies.
Cleaning out her dad's house, Stella comes across a file that fascinates her: the case Terry was working on when suddenly struck down by a heart attack. Even though he was retired, Terry couldn't forget the murder of Kate Rokesmith, strangled in broad daylight while walking with her four-year-old son near the river at Hammersmith Bridge. Her husband Hugh carried the stigma of suspicion for the rest of his life, while little Jonathan was sent to a boarding school to be brought up by strangers.
So begins Stella's slow determination to complete the case on Terry's behalf. Although, as the story begins, she is battling toothache and being apparently stalked by her ex-boyfriend, Paul, who is as sinister as he is persistent. And then weirdo, Jack, turns up asking for work. She wouldn't have taken him on except, being winter, half her staff seem to be ill and new customers, including her dentist, are demanding her services.
Jack is a meticulous cleaner but turns out to be strange in more ways than one. He has an uncanny ability to enter people's houses and take up residence without their least suspicion. He has a thing about trains and he carries a battered London A-Z which has him on a weird project only he can explain. And then there's his connection to the Rokesmith case.
Thomson creates lots of atmosphere, starting with the houses of her father and then the late Mrs Ramsay, the batty old woman customer who dies in strange circumstances; it's amazing how creepy the houses of the dead can be. Stella is always looking over her shoulder, fearing Simon it seems. Add to the list of eerie settings the path under Hammersmith Bridge, and even Stella's own antiseptic and oddly silent apartment building.
I read this as an ebook which strangely had no page numbering, only a daunting table of contents listing 71 chapters. It says a lot for Thomson's ability to maintain suspense that I kept reading. This is in part due to the likability or at least the quirky individuality of the characters, particularly Jack and Stella, who team up to make an original crime-fighting duo.
There's Stella's connection to her father as well which tugs at the heartstrings, both wishing they'd had more time for each other. This is certainly an incentive for Stella to carry on with her detective work, which is good news for the reader as there are a further three in the series so far.