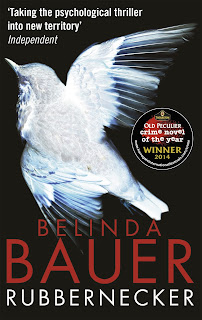 Just when you start to think there can be no new way to write a crime story, Belinda Bauer pulls out the proverbial rug and thrills the reader with this highly original page turner. If anyone could do this I suppose it would have to be Bauer who has an amazing way of getting into the heads of her characters and what interesting characters they are.
First off there is Patrick Fort from a tiny hamlet near Brecon, Wales. He lives with a mother who doesn't like him because he's Aspergers, with a fascination for dead animals, and because her husband was killed in a hit and run when collecting Patrick from school after an 'incident'. Patrick has trouble with his temper, though most of the time he's clear-headed and unfailingly logical, making casual chit-chat difficult. Bauer paints a claustrophobic picture of the two living together in misery. Thank heavens Patrick has his bike and is happy to cycle for hours across the gorgeous Welsh countryside giving the two of them a breather.
Then there's the coma patient at the hospital who is slowly becoming aware of his situation and provides an interesting commentary of what it is like being a coma patient and the oddities of the behaviour of nursing staff and visitors. When he sees a doctor murder a patient in the next bed, he makes more of an effort to communicate what he has seen but it's hard work and the tension rises up a notch or two.
The disability quota at a university in Cardiff allows Patrick to take an anatomy class. He and several med students spend the lesson time slowly taking apart a cadaver in order to determine cause of death. While the other groups of students find cancer and mortal injuries, Patrick's group has trouble with theirs - the heart doesn't look too bad and the brain yields no tumours - until Patrick, who is looking like winning the top student award, finds a clue. And it looks like murder.
The race to uncover the facts before the body is released to the relatives for burial drives the plot along, as do Patrick's antics. There are some crazy scenes at Patrick's student flat which add light relief. You need the light relief, as the anatomy class scenes can be grisly and the coma ward scenes are harrowing in their own way too.
Things become worse when no one will take Patrick seriously and he keeps getting into trouble. Fortunately he finds a sympathetic ear in Meg, his fellow student, who patently likes him even though Patrick is unable to say if she is pretty or not. He just can't tell. The story hums along with a final showdown with the perpetrator, as you might expect, and a happy reconciliation or two towards the end with plenty of surprises.
What a brilliant crime novel this is - not too long,  you'll read it in a day, and every word counts, which is as it should be. Deeply satisfying.
Posted by Caught Up in a Book at 15:06