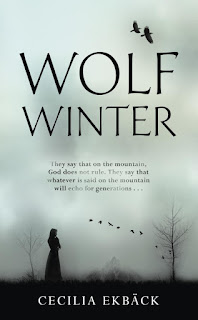 A book set in the Swedish Lapland, in 1717, is new terrain for this reader, while the cluster of homesteads on Blackasen Mountain is a fresh start for the Paavo, Maija and their daughters, fourteen-year-old Frederika and her six-year-old sister Dorotea. They are from Finland having exchanged a property with an uncle. On arrival they discover a house in poor repair and neighbours who are suspicious and nervous. Not that they meet the neighbours until the girls discover the body of a man while herding their goats.
Paavo holds back but Maija has enough gumption to have a look for herself, and  do something about it. She walks to the nearest house to get help and slowly gets to meet the neighbours: Gustav, an ex-soldier with what we might call post-traumatic stress disorder, Henrik and Lisbet who are more helpful, and Elin Eriksson, the wife of the deceased. At first it is assumed that Eriksson was killed by a wolf, but when Maija helps wash the body, the wound has marks to suggest a blade.
The story is in part a mystery around Maija's determination to discover what really happened. Frederika, who has a kind of sixth sense and frequently feels the presence of the dead man, also gets involved. Then as summer lapses into autumn, the arrival of the Lapps who leave their goats with Maija, adds complications. Frederika is drawn towards the shamanism that the Lapps have been forced to give up for Christianity, on pain of death. Elin Eriksson has also been suspected of sorcery and is still not trusted.
It is left to the priest, a one-time royal favourite named Olaus, to uncover the culprit and to ensure the farmers and villagers alike adhere to the strict dictates of the church, but he has faults of his own and a wavering confidence. Olaus and Maija form an unlikely alliance, however, in their quest for the truth.
While the novel carries the reader along with the gradual revelations that will lead ultimately to the unmasking of the murderer as well as secrets that have been hidden for years, this book is so much more. I was fascinated by the setting, the descriptions of the hardships of a Nordic winter, the glimpses of the Lapps' way of life, but particularly the historical period of a Sweden constantly at war, and a memory of witch hunts which creates a sense of unease and powerlessness among ordinary people.
The translation of Wolf Winter is never clunky, there is a sense of immediacy in its narrative style which really draws you in and the characters are very likeable. There is just so much to enjoy here - a gripping story and an evocative atmosphere. Marvellous.
Posted by Caught Up in a Book at 14:07